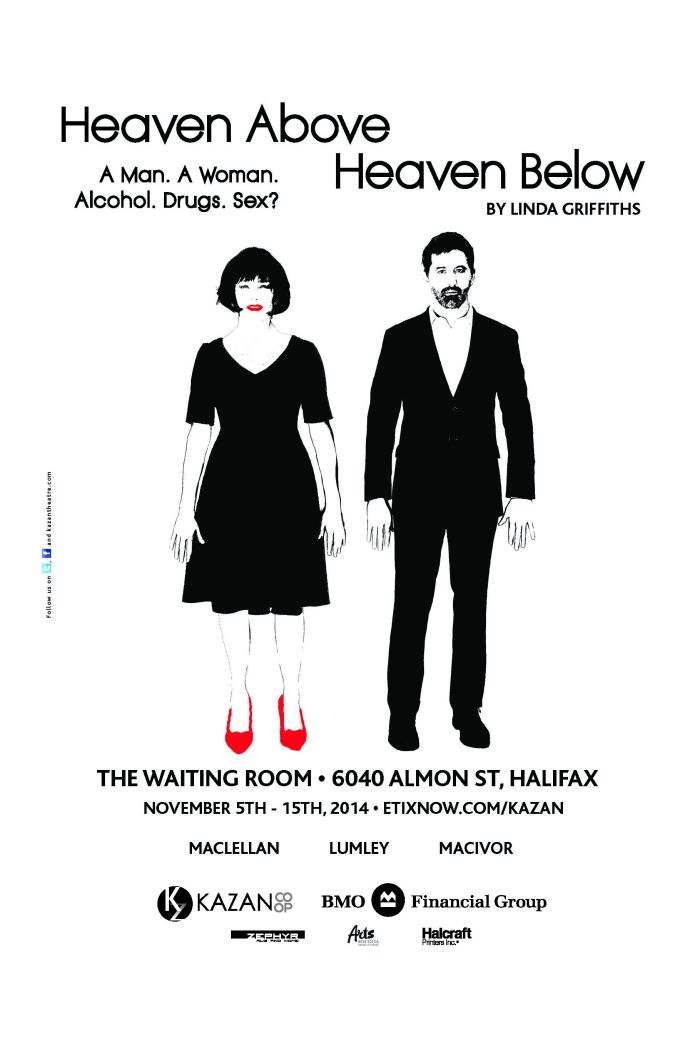 A man and a woman. A hotel room. Alcohol. Drugs. Politics. Perhaps sex? A conversation they’ve been waiting to have for twenty years.

Halifax’s award-winning theatre company KAZAN CO-OP returns to the stage this fall with Heaven Above/Heaven Below.

In this intimate play written by Linda Griffiths and directed by Daniel MacIvor, an unconventional relationship is stripped bare, revealing both its heartbreak and its humour. A story for anyone who has ever wondered ‘what if?’

The 70—minute play unfolds in a single scene as She (Kathryn MacLellan) and He (Matthew Lumley) enter a hotel room after having reunited at the wedding of a mutual friend.

Ms. Griffiths, who passed away September 21, performed in the premiere of Heaven/Above Heaven Below at Theatre Passe Muraille in Toronto in 2013. A celebrated actress and playwright, Griffiths’ accolades include Dora awards for her plays Maggie and Pierre, O.D. in Paradise, Jessica and Alien Creature.

Maclean’s Magazine called Griffiths “one of Canada’s originals, known not only for the quality of her work, but for the sheer range of her career.” Flags flew at half-mast at the National Arts Centre last week in her honour.

“This play always carried Linda’s spirit on the page,” says MacIvor. “It’s very sad to say goodbye to her. But I know her intelligence and warmth will be with us in the room, both during rehearsals and on stage for the audience as well.”

Added MacLellan: “Linda is a miracle: she wrote this beautiful play through her illness, and continued to work on it this summer, giving us notes from her bed in the hospital.”

KAZAN is also pleased to announce the launch of ‘The Waiting Room,’ a new theatre space at 6040 Almon Street, Halifax (the former Acadian Lines bus station, opposite Shopper’s Drug Mart).